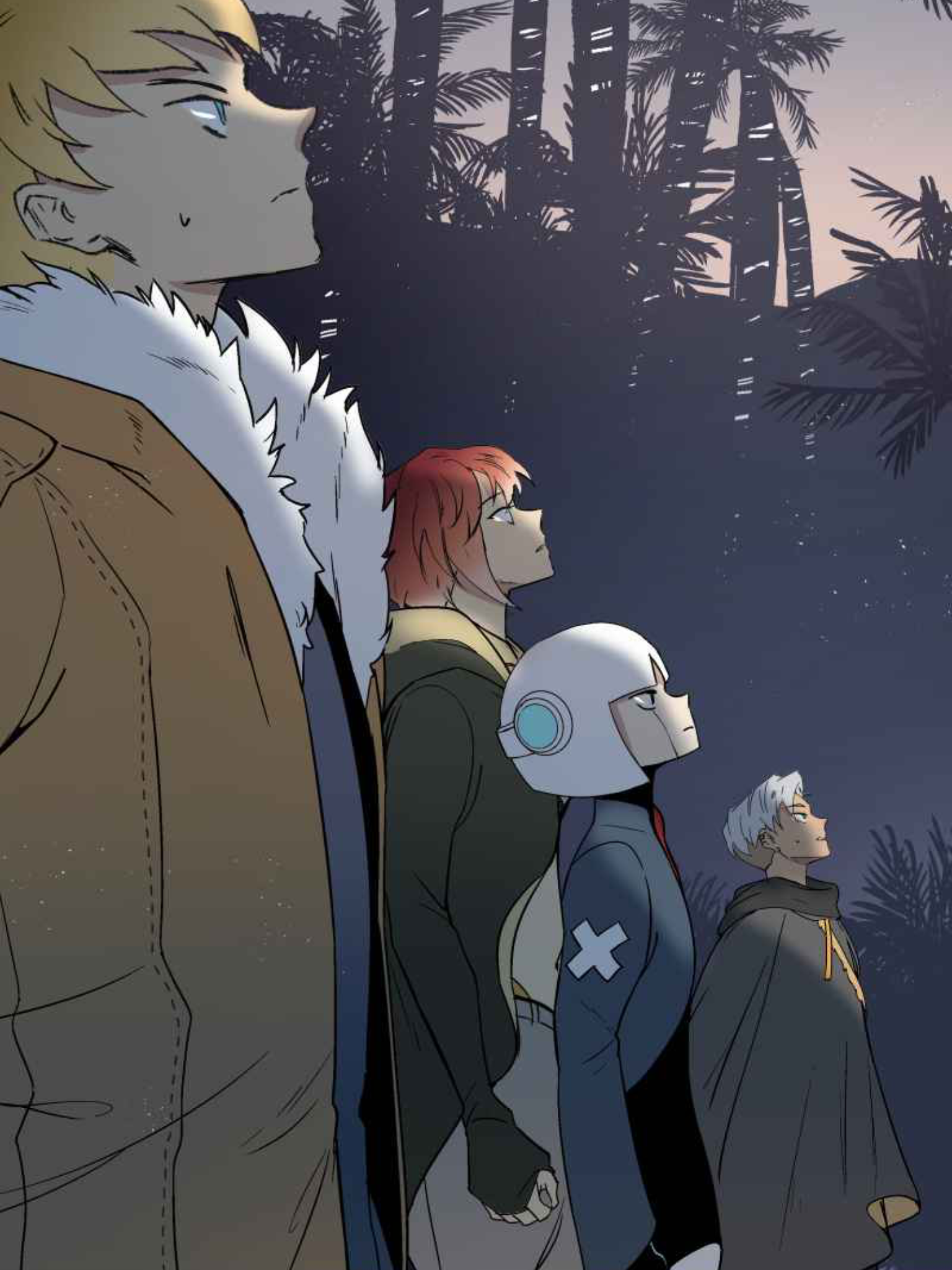 Episode 36 is a somewhat mellow affair. A breath of fresh air, delivering a bit of respite from the fast-paced action of its predecessors. Even so, it is packed to the brim with interesting details that make me ponder where exactly this is all heading. Being more expositional, we get a chance to delve once again into some of the unsolved mysteries and perhaps one rather large android shaped elephant in the room. The key question for episode 36 seems to be: Just who sent Seven and Nine.

The first panel of episode 36 is a sombre looking scene featuring Jinsei and co within their recently recovered ship. Seven is at the helm tapping something into the console. Jinsei and Kanae are sat opposite from each other. Jinsei seems to be preoccupied his gaze fixed to the floor, while Kanae seems to be watching Jinsei.

If anything, this scene can be said to be serene. I can almost imagine they are just relaxing. Taking a moment to recover from their narrow escape moments ago and who can blame them? They may have escaped the Empire for now, but Kanae and Flayvus have joined Jinsei in being the Empires Most Wanted. Not an enviable position to be in. When a world superpower is out for your blood, where exactly can you go? luckily for them, Seven seems to have the answer.

Several questions immediately spring to mind, where is Mapulehu? Is it part of the empire? and finally, why does Jinsei look uneasy? What connection does he have to this place? Looking at this panel, it seems to me that he almost looks guilty. Before we get a chance to learn more Seven’s leg malfunctions again. Bringing us to one of our mysteries.

I guess the Old man will have to fix it

We learn that he was proclaimed missing or dead several years ago and that he was researching Spirit Coins. Jinsei questions why he would not return to the empire if he has been alive all this time. I have a feeling General Marius will be a pivotal character. One could easily class him as such already considering the actions he has had have already had a lasting effect on the plot. Had he not sent Nine when he did, Kanae would never have acquired Punavarsu. She would never have overcome her deep resentment of Jinsei by acknowledging that he had changed. Given the nature of where they ended up going, one has to wonder why Jinsei’s uncle did not come himself. It suggests that for whatever reason he is unable or unsuited to travel or perhaps his previous status prevents him from taking such action. Either way, it is a curious development. Why exactly did General Marius want Jinsei and co to retrieve the Punavarsu coin? Has he learned some secret attributed to the coins, or is he perhaps intending to betray them?

Were you close to your uncle? If I may ask.

Uncle Marius… was close to my father.

This sequence gives us a first glance at General Marius and a great deal of information. But it would be remiss of me to dive straight into that rather than enjoy the sublime details that are in these panels. Symbolically speaking, starting with a handshake gives two distinct impressions, first that both are jointly responsible for the research and development of artificial coins. Second, they were very different people and as such perhaps had different perspectives. One wears formal and elegant attire, I assume this is Jinseis father’s hand given the decant trim on the cuff. The other, I attribute to General Marius is minimalistic and functional. The detail in the clasped hands speaks of trust, respect but above all else, that these two men treat each other as equals. Both offer a strong firm handshake, and neither are dominated by the other. It is little details like that that make Cape of Spirits such a joy to behold. (And makes me hope it someday gets a novelisation or anime adaptation.) The final thing to note is the colour of the gloves. Ordinarily, there would not be anything necessarily to note. But I can’t help but think the juxtaposition of colour gives the impression that one is pure, and perhaps one is not. This is possibly overthinking it though.

Though we do not see general Marius full design, I really like the symmetry of his coat. The red glow from the Spirit Coins stands out against the blue of the console which can be associated with the artificial coins. This depiction of the creation of Artificial coins tells us an important fact. Artificial coins are possibly created from spirit coins. The question is how and what effect does this have on the coins? Is this what killed the Emperor? Had the coin he was using been drained to an extent it had to draw in the life force of another in order to prevent its dissolution? Is this perhaps why Katsurou became a spirit coin? Its one of the things that I respect about Cape of Spirts, there is so much to theorise and conjecture over, so many mysteries that need to be unravelled. Its a sign of a well thought out world and considered exposition.

That made him not only a formidable Commander, but a very intelligent man on the subject of maximising the potential of coins. I did admre him as a child… So I guess you could say I was also close to him.

What I love about this pic, is that we get to see a very young Jinsei with his uncle. Though there is not much detail on his face, his smile is immediately discernible. The way his sister is clinging to his sleeve also suggests how close they were as children. A far cry from when we last saw them. General Marius’ pose tells us a lot about him. He is not an imposing figure. the outline of a smile is on his face. His focus is on Jinsei and it would not seem to be one of condescension. This is an image of a man who is kind to the children he is interacting with. Rather than loom over them, he instead brings himself to their level. It says a lot about who he is.

In the next panel, we see a shot of Jinsei and Kanae aboard the transport vessel again. Both seem to look towards to front of the vessel. The next shot is breathtaking.

The land steeped in shadow and light is a beautiful sight to behold, but also can be seen as symbolic. Jinsei has been in a very dark place for quite some time, but given recent events, things seem to be getting better for him. He is opening up more, and the peeking light over the mountain range symbolises this process. He’s only on the threshold of his journey, things have only just started to get better, but that is exactly what dawn is.

Just look at how happy Flayvus is in this panel. It is refreshing, especially when juxtaposed against the focused and perhaps a little sad image on the left. The backdrop is a continuation of the previous image one that works really well and sets a nice change to the pannels on white that are the norm.

Our first site of Mapulehu shows us it is located in the depths of a jungle. We later see Jinsei and Co arriving, each looking up at some imposing wooden gates which are closed. Jinsei begins to question whether he should be there. Just what did he do at the empire’s behest? Before he finishes, a shot flies by his ear, thudding in a tree behind him. A warning shot, if ever there was one. Seven announces their arrival and who they are, but further weapons are aimed in their direction.

We don’t care if he is a known fugitive. his actions on behalf of the empire should be enough to shoot him on sight… and any of his supporters.

Whoever this person is, she has a grudge against Jinsei. We know that prior to the incident with the Emperor, Jinsei was an arrogant man. But what exactly did he do to evoke such flagrant hatred?

I’m suposed to bring him back here as ordered by Professor Hu.

We’ve had no word or clearance from the professor. I suggest you take the fugitive far from here instead.

We almost learn what Jinsei has done, but the timely arrival of Professor Hu cuts the villager off. Whatever Jinsei did had some deep ramifications for the village. It is possible he simply conquered it and the village is now under the rule of the Empire, but I don’t think that is the case. I think its much more likely Spirit coins are involved somehow and perhaps the loss of one has had some deep-felt ramifications on the village. That would certainly explain why General Marius is there. Curiously the malcontent of the villager seems to be aimed at the Empire and Jinsei both which leads me to believe that Jinsei was involved in something the Empire did.

I would wager that ‘Professor Hu’ and General Marius are one and the same. While we have not seen a full shot of either of their faces. The strong jawline and blonde hair give me little room to doubt. That said, the foremost question to my mind is why would General Marius be welcomed, when the empire is not? The most obvious answer is that his identity was obscured. Even so, he commands enough respect and authority for the villagers to back down. If Professor Hu is indeed General Marius, what could he have done to earn their respect? Moreover, why would he stay in such a place? We do not know enough about him to conjecture the answers to these, but I have a feeling it is important.

At Professor Hu’s behest, Jinsei and co are admitted to Mapulehu. We are shown a conflicted glance between two of the villages and then the gates to Mapulehu are opened. The final panel of the episode is a shot of Jinsei, Seven and Kanae looking through the open gates hesitating at the threshold.

Episode 36 is one that holds a lot of nuggets, teases with information and provides some well-needed respite from the faster-paced action of the previous episodes. It proffers many questions and though it provides some answers, most of these simply result in more questions needing to be asked. If episode 36 is anything to go by Seven and General Marius are going to be key players in the plot manoeuvring going forward. But my immediate concern is with Jinsei. He seems perilously close to a precipice. Hanging between his unresolved emotional turmoil and what needs to be done. I can see him easily going down a dark path. But for now, Mapulehu is a sanctuary where he can lick his wounds and hopefully plan his next move… if the villagers don’t stop him of course.

Click below to read Cape of Spirits on Webtoon