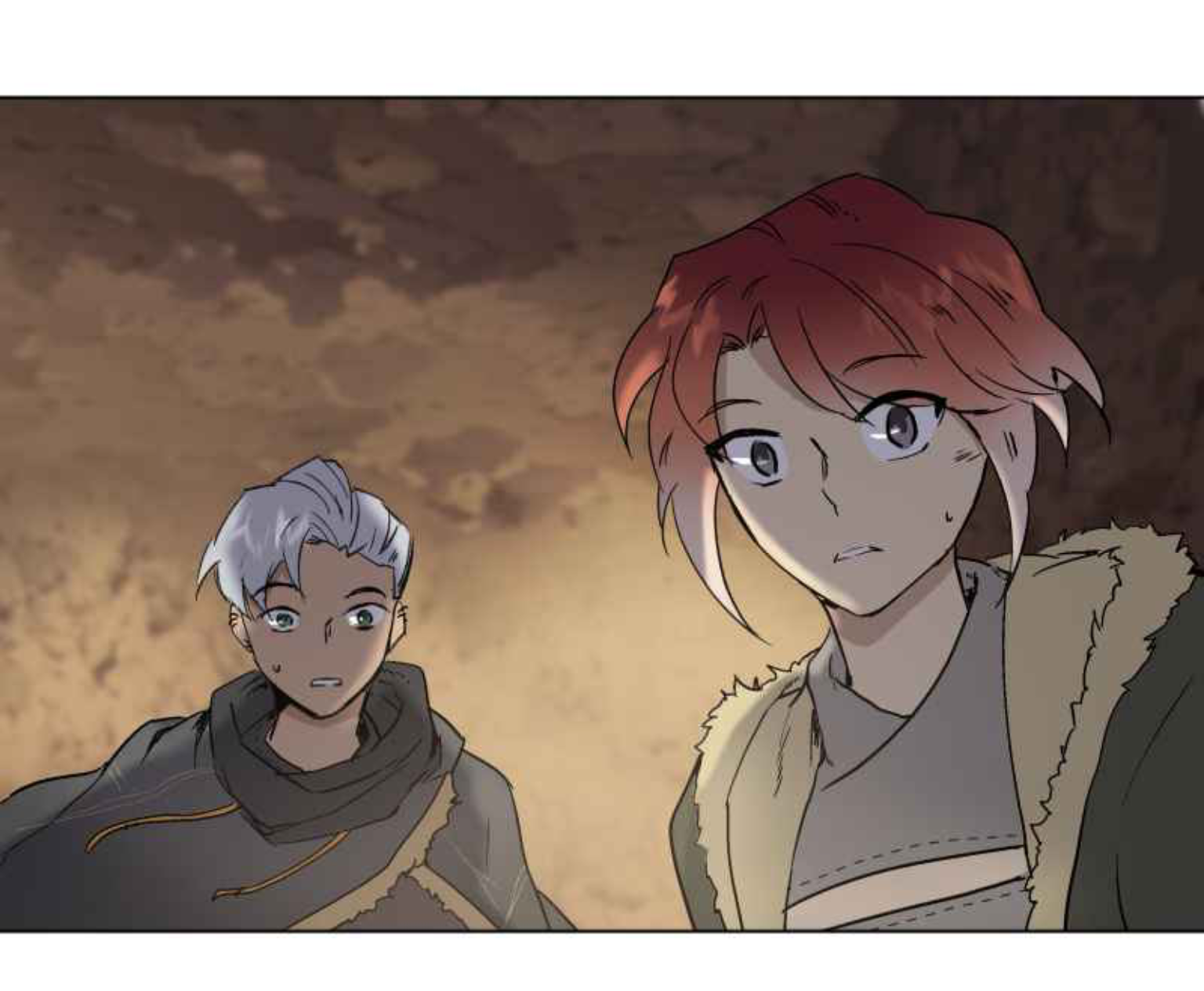 Cape of Spirits Episode 35 greets us like an old friend with a grudge. With the reunion of Jinsei and co and the retrieval of their belongings, our Quartet bursts into the episode seeking their freedom. The first panel we encounter is a close up of Jinsei and Kanae. We learn that while they managed to retrieve most of their belongings, they were unable to find the coins. Jinsei, quickly asserts that the coins are likely to have been moved somewhere else. Something they will need to figure out later.

We see in this panel a shot of the underground passages, and cells. What is interesting is that it seems deserted: odd considering the amount of noise that the troupe have been making. That said, it is likely that this is due to it being mere moments from the end of episode 34… that or the efficiency of our Mysterious Assailant.

I love this closeup on Jinsei because it’s a call back to episode 31 and Katsurou’s observation. (I hope we see him again soon!) At that time Katsurou claimed that Flayvus and Kanae were Jinsei’s friends. Something Jinsei immediately dismissed. His concern in these panels shows us who Jinsei is and how far he has come. I think he has made a concerted effort to appear aloof and uncaring and the barriers he raised – I assume due to the circumstances around his father’s death – are beginning to thaw. Jinsei is slowly learning to trust and to let others in yet despite the enormous development already, he still has a long journey ahead. For the moment though, he seems to be on the right path. His genuine care for his companions is great to see.

This is one of those golden character moments that shine due to being a comic. The expression of shock mirrored on their faces, makes the struggles and arguments from season one seem a far off dream. Kanae and Flayvus are taken aback by the new Jinsei that is emerging from his thawing persona.

It is a small detail that stands out because of its simplicity. Kristina clearly has an eye for character moments and this is one of those where it shines. It is always about the complicity of emotion portrayed. While we do not get insight into Jinsei and Kanae’s feelings on the concern offered by Jinsei, it is clear his actions have shocked them. Their widened eyes and the frozen mouths are testimony to this. But is Jinsei being truly genuine or are his actions calculated? I would say no. There have been far too many instances of concealed feelings building up to this one for that to be the case. To view it simply, he has very little to gain from such duplicity.

In the next panel, we see an awkward moment between the trio. Kanae responds with a graceful “Um–” while Flayvus, true to his jovial nature cracks a sarcastic “Jinsei… You really do care–!” to which Jinsei responds with “Whatever. Where is Nine?”

This panel made me laugh. The juxtaposition between our Mysterious Assailant’s (Now revealed to be called Seven) stern glare, Kanae cringe and Flayvus’ hyped exclamation is sublime. It gives us a little bit of respite to the growing tension while staying very close to the plot. It’s also an excellent way of revealing Seven’s name which had started to feel a bit like the elephant in plain sight. The only question I had was how he knew it as it from my search of previous episodes I could not find it being revealed to Flayvus. It’s perfectly plausible that Seven revealed their name “offscreen” while they searched for Kanae or retrieved the trio’s belongings. So It’s more a case of pondering, than highlighting a fault.

This is a really interesting revelation, I like the convention of using black lines around the dialogue bubble to indicate this is thought rather than speech. It is a simple yet effective way to establish Jinei’s thoughts, without hindering accessibility.

If Jinsei does not recall Seven then who exactly sent them? It would suggest that the androids are more mainstream than initially thought. However, it can be no coincidence that the two we have encountered so far have been named “Seven” and “Nine” respectively. Moreover, having seen the capabilities of Nine, if the empire was able to mass-produce them, they would use them in place of their human food soldiers.

Ultimately this suggests there are at least Nine androids, of varying temperament and capability. Which in itself leads me to believe they may be incredibly hard or expensive to make. All of these lead me to suspect that whoever sent Seve to retrieve Jinsei is either closely affiliated with, or a part of the Royal family. The only other possibility would be someone closely related to the research and development of the Androids. However, considering the lengths the empire is going to in order to gain power, the first is much more likely.

Hypothetically, if our mysterious benefactor is from the royal family, their attempt at saving Jinsei is tantamount to treason… Unless it was a purposeful act from Empress Sumire. But even if Sumire was involved, that wouldn’t explain why Jinsei has no recollection of seven. There is the possibility that Seven has another name, but then the question is what would they gain from doing so?

Putting the mystery aside, for now, the next panel showcases our team’s arrival at the hanger only to find it devoid of ships – likely escorting Sumire away from the prison. There is however one ship that remains to them. Flayvus’ ship. However, it is quite far from them and is heavily guarded.

The sequence that starts here is particularly well done. It takes a narrative problem and provides a solution using tools that were established earlier. Sevens solution to this issue is to question whether the team can cross the floor in twenty seconds. We don’t get a verbal answer. Instead, we get a sharp cut to one of the guards shouting to his comrades.

Keep your eyes sharp, they could be anywhere!

This sequence is an excellent example of one of Cape of Spirits strengths. Kristina uses a careful mix of dialogue, visual close-ups and action to weave the story. By choosing to include an action sequence rather than dialogue to convey the progress of this segment she allows us to experience the tension organically. Focusing on the guards, threw us right into the moment, personified our current antagonistic force and at the same time Evoked the question: will they be able to do it. Seeing the guard react to the sound of their movement and then giving us a closeup of the Flayvus, Kanae and Sevens worried faces is a brilliant way to evoke the tension. The closeup on the guard looking around, Sevens concerned face and the 5 seconds remaining on their stealth counter further embed this. While the flick between images may seem quick, they convey a lot of information and further build tension. When the guard finally turns and moves on just as the stealth spell runs out, the tension dissipates. The team got through the main hurdle, but as the next panels show, they may have overlooked one key thing, the noise the door makes when opening. But with luck and speed, they manage to board the ship just as the soldiers begin to fire on it.

As they make their escape, General Pisca arrives and manages to grasp hold of the ship with her Regalia which stops the ship in its track. Forcing Seven to go the offensive. This scene is exceptional at exhibiting the capabilities of regalia and the limits of normal coins. The difference in strength is immense, though Seven manages to force Pisca to withdraw her weapon to protect herself. However, the attack launched by Seven is obliterated within moments a chilling reminder of how much power Pisca and the Empires generals hold. A good demonstration of how powerless Jinsei and co are at the moment. Perhaps General Saz will come to his senses soon and help out Jinsei – I dearly hope so.

Seven! Get back inside!

I am liking this caring concerned Jinsei. Its a side of him that is good to see. Sevens leg seems to malfunction again and they nearly plummet from the airship. Luckily Jinsei is at hand to grab hold of them and pull them inside.

The last panel of this episode is a close up of a very displeased General Pisca.

Episode 35 is a thrilling action-packed culmination of the previous episodes. It packages character development, new worldbuilding information with some great character moments and natural plot progression. While the stakes are high, it very much feels like the calm before the storm and the true closure of season one. Jinsei and the team have escaped, but not without sacrifice. They have lost their coins and worse still left Nina behind in the hands of the Empire.

Jinsei’s escape also will have further damaged his relations with Saz and Sumire, a thread I expect will be picked up later alongside Nina’s apparent abandonment. The team are free, but as fugitives of the empire where exactly can they go? While this team had a reunion, it is bittersweet. One misstep could land them in a much more perilous position – the question is what can they do ensure they survive?

All in all, this is a fantastic episode with enough diversity to encapsulate my attention and drive me onwards, hungry for more.