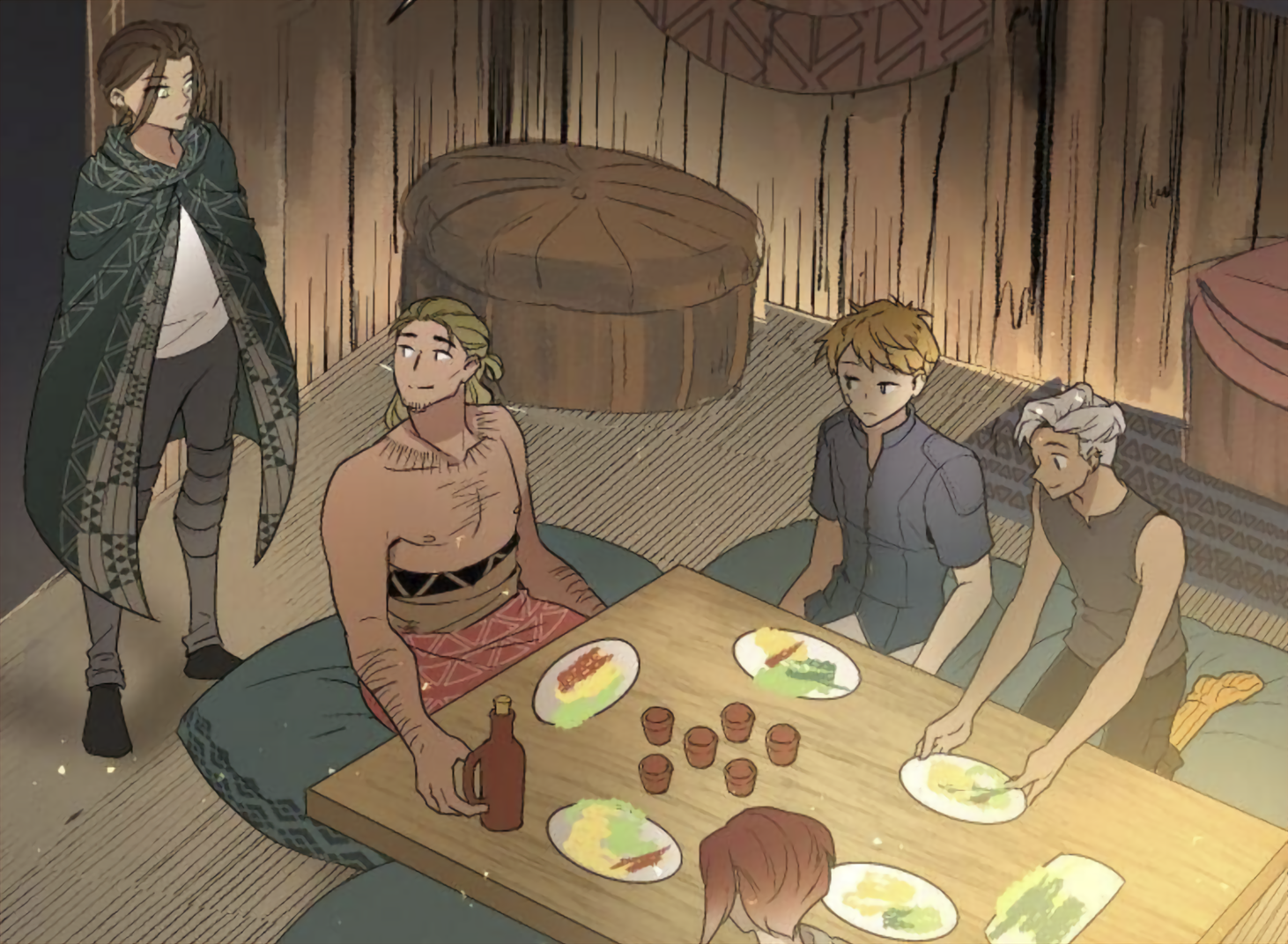 Episode 46 is a calm affair following the revelations of episode forty-five. It hovers as a tenuous link between what has come before and what is yet to come. The tonal shift and sudden pace change this episode brings is a welcome one. The episode opens on a view of the night sky, against the shadow silhouette of Marius’ hut and the distant lights of Mapulehu before shifting to a lit visage of Jinsei and co enjoying a feast while Weret looks on. The only omission is Seven who is charging ready for the mission. Despite the impending urgency of the path ahead, the atmosphere between Jinsei, Weret and the others is relaxed, though evidence of their brutal training in previous episodes remains. It is a nice touch and the banter that flows between the group is natural giving a nice respite.

The most striking change within the groups dynamic is the awkward exchange between Weret and Jinsei. No longer is there an edge of mistrust, or open hostility. In its place is quiet respect. They are not friends and are a long way from being so, but they have found a place to draw a line in the sand and in doing so have found a measure of respect. A foundation from which a deeper connection can be built. More telling is that Weret does not accept Jinsei’s apology, but nor does she reject it out of turn, instead she simply infers that it is not needed.

I adore a bouncy excited Flayvus any day, it is a wholesome sight to behold. Matched only by the pride and joy that is on Kanae’s face and the way Weret’s eyes are on Kana. I suspect there is something brewing between these two.

One of the most cathartic aspects of this episode is the little character moments. This episode very much feels like the calm before the storm, a small moment of respite, after the training of previous episodes and the storm that is yet to come. Its beauty is in the small moments: Flayvus getting excited over Okolehao, a celebratory drink I assume is custom in Mapulehu. Marius’ sombre speech on what is to come, and the expression of his pride in their progress and the clarity that Jinsei has found. The toast between Weret and Jinsei “to actions… and not meaningless words.” Together they build a narrative that is endearing and wholesome. We are given a pause to look back over the past forty-five episodes at the struggles and triumphs. To examine where Jinsei and co and come and how far they have yet to go. There is a sense of imperfection with the group dynamic, some tension that for the moment has been subdued, but which I suspect will resurface at some point in the future.

But by far for me, the most symbolic panel of the episode is this one. Showing only hands, and tumblers, we have no true way of knowing who is who. But it emphasises where the connection between the characters are. Not all hands are quite together, though all are close. For me, it says much about where the group is. They have bonds, some are close, in others there is is a gulf that needs to be bridged. But for now, they are united, with a common goal and cause.

The drinking scene with Jinsei, Marius, Weret, Flayvus and Kanae is an important point in the overall development of the characters. It tells us a lot about where they are and what is to come. Jinsei sits on the left of

Jinsei and Marius are among those that have a really well set up and complicated relationship. Marius clearly cares for his nephew having sent both Nina and Seven to help him… and yet, at the same time there is a reticence between them. In the few flashbacks scenes we have seen previously Marius and Jinsei were close, but Marius’ presumed death broke that bond. The relationship we have seen initially between them has been frosty, Jinsei being unable to bring himself to let Marius in, to allow him to be close. When Flayvus, Weret and Kanae leave, Jinsei and Marius remain alone and for perhaps the first time, they have an opportunity to speak candidly. There is no pressing secret to be revealed, with no training to be delivered. At this moment, the calm before the storm of the mission tomorrow they finally have the opportunity to be Uncle and Nephew, for Jinsei to find, examine and resolve the maelstrom of conflicted emotions within.

True to Marius’ character and perhaps encouraged by the drink that have rosy’d his cheeks, he jumps into his usual non-nonchalant style. His compliment to Jinsei seems sincere and also highlights that despite how close they once were, the years have grown the distance between them. The Jinsei Marius knew was a child and while the Jinsei Marius is drinking with isn’t quite the picture of maturity, he is far older than the one Marius knew.

Jinsei’s reaction to Marius’ complement at first seems unfazed, and almost bored. Yet as the panels change there is an aura of sadness that resonates around him, most evident by the thoughtful turn of his eyes. We are given a view of his back, tense and slightly hunched over as though the weight of emotion is weighing him down. It is at this moment that Jinsei starts to open up about his father.

It was rare, but… sometimes I would have a drink r two with father.

Not during some fancy ceremony or festival, but… just us. Perhaps only once…. I remember him talking about how much he missed Mother.

The sad kindness that resonates from Marius in this moment makes me love his character even more. We never get to see what he would have said, but given the look on his face, the sadness that his eyes hold, it would have been wholesome. Instead Jinsei shows us his vulnerability.

Jinsei promptly grabs his coat and makes his excuses. But the importance is what the exchange signifies. He has finally indicated that he perhaps needs people. That he cannot do things alone. The proud look on Marius’ face shows all the kindness and care he holds for his nephew

I’m glad you are here too, my dear nephew.

It is a cathartic moment, that shows us the emotional depth and growth Jinsei has undergone since episode 31, where he sat in his cell and though given the chance to explain to Saz and Sumire, instead chose not to. He instead chose to weather their ire, chose to accept their blind judgment without even attempting to defend himself. Ultimately, accepted facing the burdens alone. This Jinsei is stronger, he is not afraid to show he needs people, to show that he cares about them. Even though he ultimately chooses to excuse himself it is a different approach to what we have seen before.

The end of the Calm…

The finale of the episode focuses once again on our OG trio, Jinsei, Kanae and Flayvus, seated around a campfire. The epitome of this section seems to be the warmth of friendship and the bond they all share. Opening with a drunk Flayvus calling Jinsei over, Kanae soon joins them seemingly after searching for Flayvus.

Little details like this always make me smile as they show the depth of friendship and underpin the trust that exists between Flayvus and Kanae.

I was not at all surprised that Flayvus was able to immediately identify that Kanae was wearing Weret’s cloak. But the true charm comes with Kanae’s reaction, the flustered look on her face, her gaze fixed down on the cloak… it spells perfectly where her attraction lies.

The flashback we are given is really cute and just the sort of awkwardness from Kanae and oozing confidence from Weret I’ve come to suspect. There is a gentle edge to the interaction that belies the natural and caring act of Weret giving up her cloak without hesitation for Kanae’s benefit. But I think what I love about this scene so much is just how mundane it is. Often when same-sex attraction is depicted, it is handled with either an air of showmanship “LOOK WE HAVE GAYS” kind of embellishment that trivialises the emotions that the event should portray. Lesbian attraction treatment is often given through one of two approaches, the “friends who go too far” or the hyper-sexualised heterosexual male fantasy view of two women together. Thankfully, neither of those saturated views are present here, nor is the associated stigma that usually accompanies it. Instead, we are given the pure unfiltered natural attraction of two women. I must admit I was surprised by some of the comments when this episode was published. There were many who felt that Jinsei and Kanae had a thing going for quite some time. I find it a difficult reading to quantify. Jinsei and Kanae may well have shown friendliness towards each other, a softening of their suspicion and outright dislike that was prevalent in the first few episodes of season one. But never have there been any suggestion that it was more than mutual respect and friendship. When looking at the Weret and Kanae, the attraction could not be more obvious, beyond this episode, there have been many ocasions of connection, blushes and interactions that have shown the attraction Kanae has towards Weret and in this episode we see that perhaps that attraction is reciprocated. As far as romance goes it is well paced, developing slowly with us only now seeing the first signs of something building. Certainly something to look forward to, but also something Haku should be proud of. The handling really is quite exceptional and above all, at least in my opinion, feels natural.

The return to the present is abrupt as the flashback. A blushing Kanae responds with a simple “..what.”

Kanae’s reaction is the final piece to really underpin her feelings. It is interesting that it is Jinsei of all people who gives her encouragement (Something even Flayvus cannot help but to tease him on). Before promptly deciding to take a nap. The episode ends with a focus on all three:

The flash of a memory shows a glimpse of where the three are heading. While Katsurou seemingly is no longer around to be part of the gang, Jinsei, his chosen wielder is. It signifies a parallel that has been slowly building for some time now. One that i look forward to seeing develop further.

Kanae smiles as she considers old memories and new friendships.

A drunk Flayvus shows his outrage at Jinsei sleeping while the night is young.

Jinsei sleeps peacefully, perhaps for the first time in too long. A cathartic end to the episode.

The final panel of the episode is a Beautiful piece of the night sky above a sleeping Mapulehu, the embodiment of the calm before the storm and an apt end to the training arc.