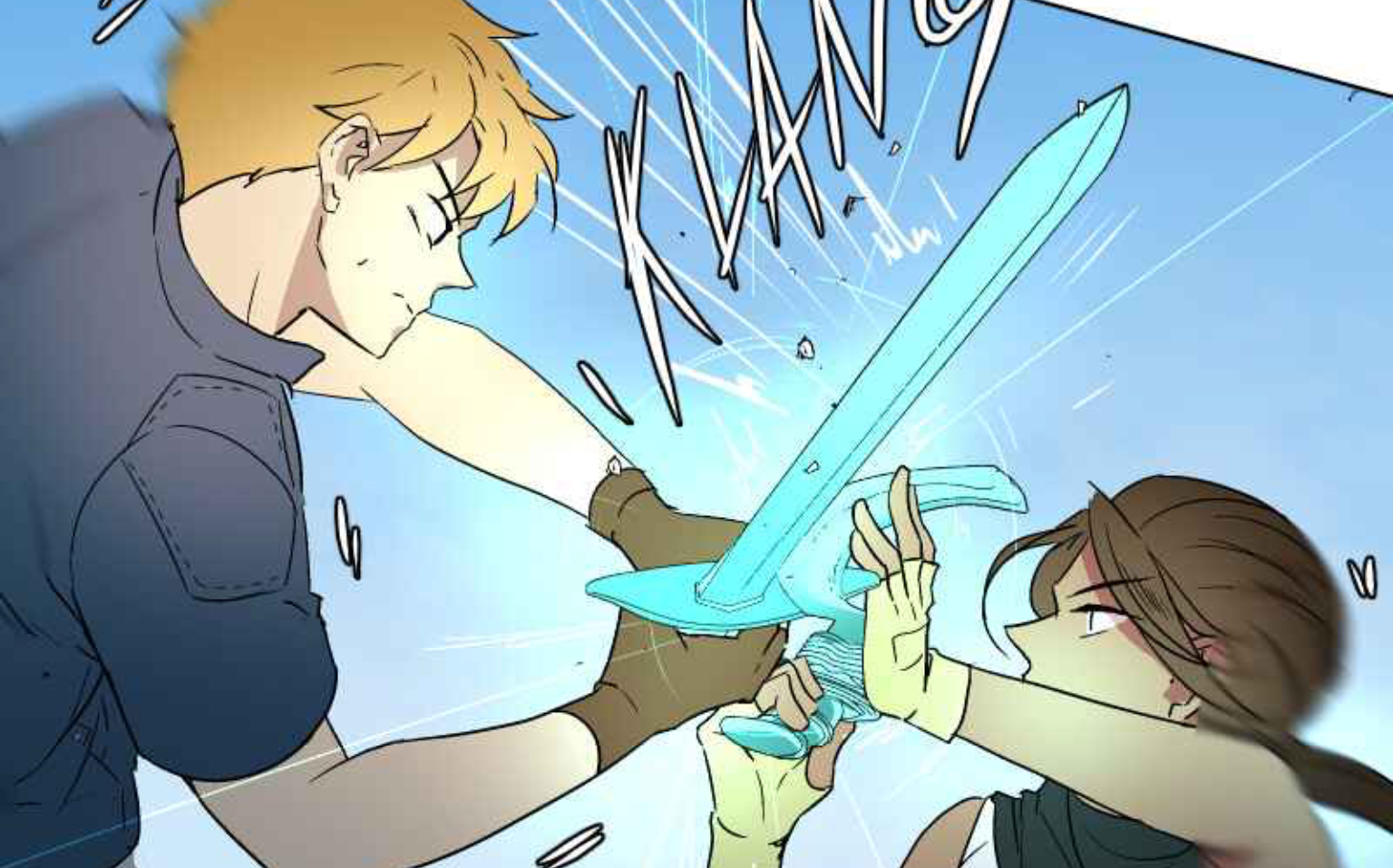 Episode Forty-four is the culmination of Jinsei’s journey so far. It is where he is forced to face the big questions and takes his first actual step into tackling the burdens that currently hold him back. For his duel against Weret and Seven, Marius is allowing him to use two support coins, while his only offensive coin is the sword that perturbs him.

At first glance, it seems cruel of Marius to force Jinsei to use the sword when previously it perturbed him so much. Equally pitching him against Weret would seem a poor choice given her disposition towards Jinsei… and yet it could also be what both of them needs. Jinsei will undoubtedly have to overcome his PTSD following the death of his father. Weret needs to confront her blind hatred and the blame she places on Jinsei. Marius’ laid back attitude makes it easy to forget he was a general in the empire, one of its best researchers. He may play the fool, but he is far from one. This becomes all the more apparent when you consider what it is he is trying to do with Jinsei and Weret and his motivation. Marius is a man who has goals and is unapologetic in achieving them, but equally, he is not ruthless. He pushes Weret and Jinsei, not only because it serves his goals, but because it is the best thing for them personally. They both are broken in some way, Jinsei with his PTSD over his father’s death and Weret with her blind hatred of the Empire.

Before Marius is even finished with explaining the rules, Seven is on the attack, leaving the only rule as “Don’t kill each other.” Working as a pair, Seven and Weret are quickly able to use surprise to push Jinsei onto the defensive forcing him to rely on his supportive coins from the outset.

Weret and Seven’s surprise attack ultimately fails for two reasons, first that Jinsei fended them both off without costing him anything and second that it riles him up. His confidence and demeanour all change at this juncture and he gets his head into facing both Weret and Seven. His proclamation that the fight will be over soon is a callback to his Empire days, to the arrogant Jinsei who blindly followed the Empires orders. He takes a moment to activate his shield before heading on the offence and directing a shield bash at Weret. One thing that resonates here is how tactical Jinsei is. He takes note of Werets Sword (which is an ancient Egyptian Khopesh) Though we are not privy to any further thoughts, given that he draws a focus on the sword at all, shows that he is not blindly running into to attack, he has a plan. He attacks Weret head-on and then before she can counter and before Seven can strike from behind, uses the speed coin to disappear.

It is here that Weret’s single-minded approach is exposed, narrowly missing Seven. It makes me wonder exactly what state Jinsei would find himself in had that strike hit him. Though Weret responds to Seven’s “Watch it.” The look on her face and her nonchalant, “whoops” makes it abundantly clear that it was no mistake. Weret is not playing by the rules here. Jinsei uses their distraction to mount another counter striking and then disappearing before they can react. Arguably it is a good strategy, against two foes, Jinsei’s weakness will be getting penned in. This is a lot more difficult if he stays on the move and uses speed to his advantage however somehow that feels like a trap Marius has set for him, it is only a few panels on that we see the ramifications to this approach. I am reminded that this is the style of fighting he utilised against the bounty hunters in season one. He was able to swiftly overcome them only because Kanae was backing him up and while they faced more opponents, his first strike took them by surprise and thus enabled him to overcome them. That approach will not work here. If it comes down to a battle of attrition, Jinsei will lose, the speed coin simply takes too much stamina to utilise for long periods.

Jinsei is stubborn, but also aware of the toll the coin use is taking. As the heir to the Empire, he was likely brought up with a strict training regime and has a lot of experience with using coins. The arrogance displayed in previous episodes is evidence of how he rates his skills.

Jinsei responds to Weret’s jibes by going on the offensive, only this time Weret and Seven are ready for him, both easily dodging the leg swipe he attempts. Are they growing used to his tactics? or is Jinsei getting slower?

Despite Weret’s Jives, Jinsei seems to be enjoying himself and yet the Coins are starting to take their toll. Its an important demonstration that all Coins have their limits and that limit is dictated by the wielder themselves. It cements the magic system of Cape of Spirits as being hard, rule based, something I have suspected for quite some time and can only be a boon to the world-building and narrative in the future.

Finally we arrive at the moment, he is losing the battle of attrition and its abundantly clear that Weret does not care to comply to the rules Marius laid out. I doubt Marius nor Seven would allow Jinsei to be killed, but in this moment that doesn’t matter. Jinsei is faced with a choice and he knows his back is against the wall. He knows things cannot continue the way they are. But his choices are limited, and time is running out.

A single glance can tell a thousand things. In this instance, Jinsei’s eye tells of his will, his desire to win, to survive.

Though this battle started out as training, somehow it feels much more profound, its stakes are palpable. It is a marvel to behold the pure energy of his desperation and a feat Kristina should be proud of. Evoked within a single panel stood on the backs of hundreds is the essence of Jinsei’s journey, the hardships he has endured and the challenges he needs to face and right now, it all hangs on one thing. Can he overcome his inner demon and take up the sword?

There is something beautiful about this panel. For the entirety of this fight, the sword has stood resolute, untouched by Jinsei, Weret and Seven’s battle. It is reminiscent of the sword in the stone, only it is not a question of whether Jinsei is able to draw the stone from its plinth, but can he muster the strength of will to do so?

This is the turning point, the moment that Marius has been gambling on. The instant where Jinsei finally chooses to face to his inner demon. Where he makes his stand. There is uncertainty tinged with a little shock on Marius’ face. The set of his jaw suggests to me he isn’t quite certain this is the right thing to do. We aren’t privy to his thoughts, but if previous episodes are anything to go by. Marius cares deeply for Jinsei and though he knows this will be painful for his nephew, it is a path Jinsei must tread.

The effect of wielding a sword on Jinsei is palpable. Outwardly he seems calm as he tugs the blade from the ground. The Badum of his heart tells us inwardly he is screaming. He wastes little time on this and instead goes on the offensive, leaving a shocked Seven in his wake as he heads for Weret. This battle, as it has progressed, has become personal; evidenced by how both Weret and Jinsei disregard Seven. As things currently stand, Seven may as well not partake at all.

Jinsei lets Weret’s jibes get the better of him and loses his focus, in that moment, Weret is able to utilise the tactical benefit of her Khopesh and disarm Jinsei, by sending his sword flying and forcing him to rely on his shield. But even that is of limited use against the sickle blade of a Khopesh. Weret finally manages to overcome Jinsei and has her blade pointed at his chin, he’s wide open and for now has lost.

The end of episode forty-four is abrupt and telling. Weret’s final statement lands with the urgency and impact of a rushing tide. The source of Weret’s resentment is not a surprise and while we do not know specifics, we can already imagine what they did. We have seen the evidence in Mapulehu. If the lands demise is as profound in Mapulehu where Lono and Pele were stolen/ corrupted only a few months before. How bad would Weret’s home town be? For Jinsei to believe that the Weret coin was his family’s heritage, then his father must have been in possession of the coin for years, decades even. How much will Weret’s hometown have deteriorated without its coin? The question has no answer, but from what we have seen, it does not bode well. Either way, Episode forty-four is an emotive exposition of these characters.