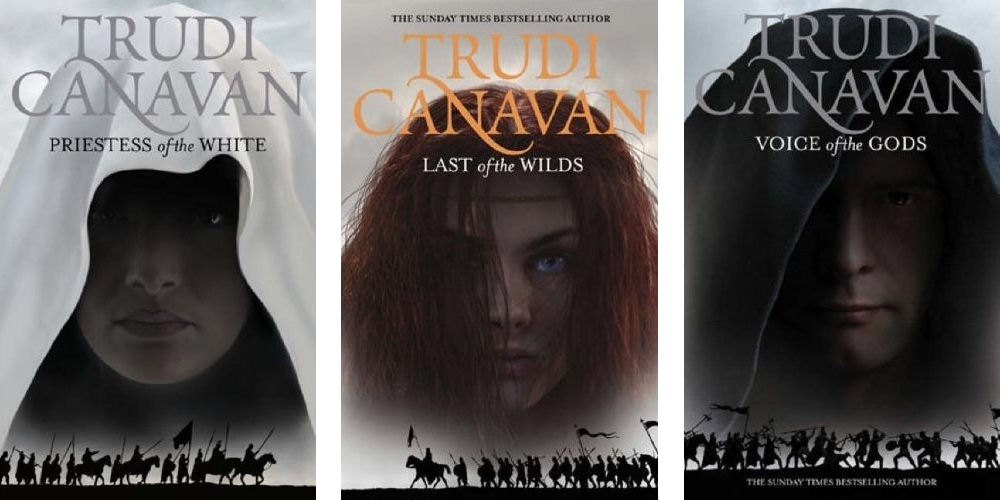 The Age of the Five Trilogy by Trudi Canavan is the second series written by the Australian fantasy author.  While set as a trilogy of three volumes; Priestess Of The White, Last Of The Wilds and Voice Of The Gods, The Age of the Five Trilogy works more as a single volume, as the individual plots of each book are almost entirely interwoven with one another, than as the three separate books it is available as.

The Age of the Five Trilogy follows Priestess Auraya as she climbs to the top of the Circlan religious order, only to find the gods she worships are not exactly what she believed them to be.  The gods’ challenge her faith, pushing her to breaking point; while the world erupts into a religious war, Auraya discovers truths about the gods that bring her entire world into disrepute.  The Age of the Five trilogy is a complicated yet thrilling read, however for the traditional Canavan fan, at times the plot may seem predictable. However that is not a bad thing, while new readers to Canavan will enjoy a simple style and easy read, those who have encountered Canavan’s Black Magician Trilogy will notice parallels between the two series’.

Canavans strength comes from her ability to forge remarkable characters.  The question remains throughout the series, who is stereotypical fantasy “good” and who is the stereotypical “bad”. The answer to this is neither, Canavan poses an impressive argument over Protagonists and Antagonists – especially towards the end of the series where the nemesis of The Priestess of the White is revealed to be not as bad as first indicated, the white – championed in Priestess are seen to be unjust and the reader is forced to challenge their assumptions about the characters.

Canavan’s written style is simplistic, but her ideas are vast. Her use of description is limited, though this does not undermine her world building.  Her creativity is shown to full splendor with the multitude of creatures she has woven into her fantasy world. The only drawback in her creation is that it is not always easy to understand what is happening when grasping outlandish words and constructs. One could say, why create an alternative to a rat, when a rat would suffice?

Overall The Age of the Five Trilogy is a thrilling though flawed read. While she has included much that is of interest and intriguing, the plot can seem predicable in places. However there are a number of twists, which are both shocking and refreshing, allowing the trilogy to bring enjoyment.  It is unclear what Canavans’ purpose in writing the trilogy was, but it is easy to summarize as an exploration of polytheistic religions and paganism. As usual Canavan has placed a high importance of medical knowledge and healing – with most of her characters playing a role in discovery. For an easy read, The Age of the Five is a gem among the often stogy and lofty volumes of the fantasy cannon.

The Age of five Trilogy can be purchased from Waterstones Uk:

Please click on the book to go directly to the Waterstones listing.

More information on The Age of Five and Trudi Canavan can be found at www.trudicanavan.com