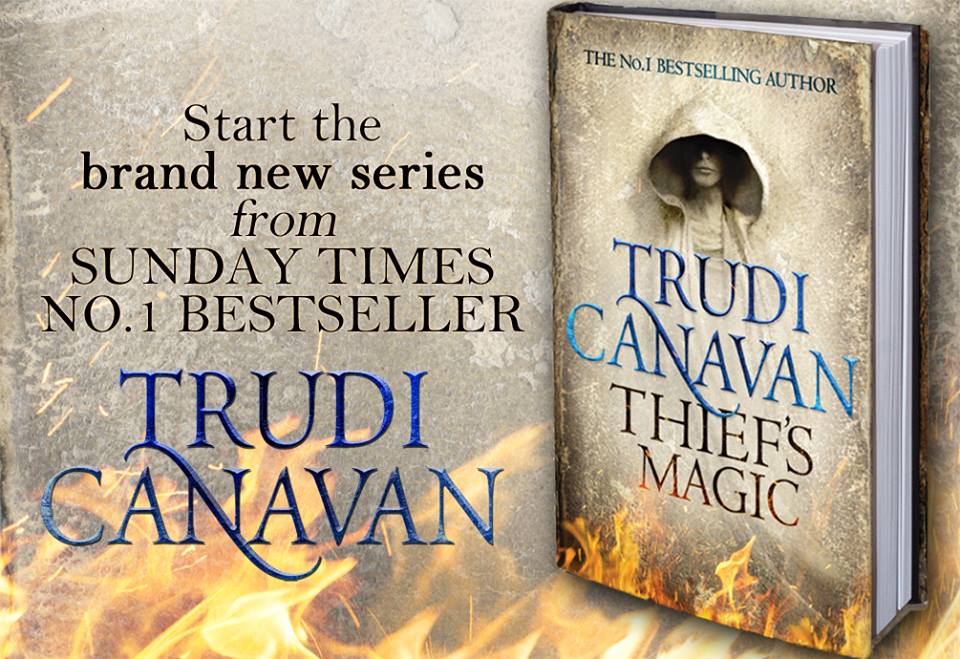 Thief’s Magic, book one of The Millennium’s Rule Trilogy,  is a novel about love, betrayal and trying to do the right thing, when the world is compelling you to do the exact opposite.

As with all her novels, Canavan has crafted interesting, relatable and more importantly flawed characters. Thief’s Magic follows Tyen, an Archaeology and Sorcery student as he tries to uncover the secrets within Vella –  a sentient book, that for him is a source of wonder. However, to his peers and Academy professors, Vella is a dangerous object and must be destroyed. This propels Tyen and Vella on a journey of discovery and  co-dependence as Tyen tries to come to terms with the loss of everything he held dear and his obligation to Vella.

In another world Rielle chafes against the limitations placed on her by society and her obligations to her family. A chance encounter with a criminal sets her on a path of love and betrayal. to survive in this world where trust is not easily given or upheld, she is forced to take drastic measures to fulfill her hearts desire… but when she breaks a cardinal law… everything unravels and the world it seems, conspires against her.

Thief’s Magic is a breath of fresh air in the fantasy cannon. As with her other works, her style is precise and to the point. She weaves the mystery as an artist paints a masterpiece. While ensuring the sparse descriptions give enough: a balance she maintains perfectly throughout. Those that are familiar with her previous series, The Age of Five, The Black Magician and The Spymaster Trilogy, will find Thief’s Magic everything they have come to expect from her and unlike some of her earlier works the parallels between her works are almost non-existent.

However, at times the switching between characters is off-putting. The twin plots are opposite faces of the same coin, both tangibly close, but never truly aligned.  Woven around a constant: the nature of  Magic, the switching of plot lines causes jumps and can be frustrating (mainly due to Canavan’s habit of leaving each section on a cliff-hanger) Despite this, Thief’s Magic is a book that grabs you firmly and does not let go until the end: A thrilling, exiting read, that is clearly Canavan’s best yet.

Thief’s Magic can be purchased by clicking the image below. Click the image below to learn more about the fabulous works by Trudi Canavan: